Mango stew among few summer adventures for this busy blogger 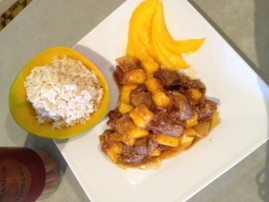 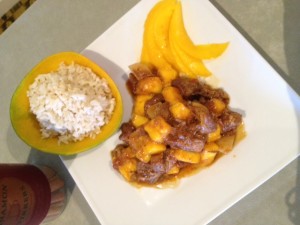 Mango in a stew? Delish! Just be sure to serve it hot.

Can a person hold down a part-time job, freelance for a half-dozen writing/editing clients, work on a cookbook, engage in volunteer projects aid their ailing mother and keep up a household AND a blog?

If that person is me, apparently not! It’s been such a busy summer with way too few food adventures to report and every time I think about blogging, it’s at the end of a long day of writing other things and I say tomorrow…which turns out to be almost three months ago!

I did have a little food fun: Helped coordinate the recipe contest at Mangoes at the Moana where I thought the most interesting recipe was one that didn’t even place. It’s called Summer Mango Pork and Potato Stew stew and if it had been possible for contestant Shayna Robertson to serve it hot, I think it really would have been a winnah! Even cold, you could taste the cinnamon and other spices she used to really come through. The sweet mango against the rich gravy was very interesting. Robertson, disappointed, talked to me after her and I encouraged her to keep working the idea.

Cinnamon, by the way is an ingredient I like to use in my own beef stew, though my daughter rolls her eyes and says “You can never do anything NORMAL!” Here’s the recipe.

And next time, I’ll tell you about my other bit of food fun amidst the chaos of freelance assignments and book deadlines: Making challah, the Jewish sabbath bread. It’s all in the braiding, baby!

Salt and black pepper to taste

Season the pork with the salt and pepper. In a stew pot or pressure cooker, warm 1 tablespoon olive oil. Working in batches, brown pork on all sides, about 8-10 minutes per batch. Transfer each batch to plate and reserve as you work.

Add the onion to the hot oil and sweat about 4 minutes (the onion, not you!). Add the garlic, beef base, tomato paste, cinnamon, coriander, nutmeg, cloves and red pepper flakes. Cook about 1 minute. Add the wine, tomatoes with their juices and sage, and return the pork to the pot. Bring to a boil, cover and cook until pork is tender, about 45 minutes on a conventional range or 20 minutes in pressure cooker at high pressure.

When pork is tender, remove lid and allow stew to thicken at a boil, about 5 minutes. Add the potatoes and cook until the potatoes are fork-tenders, about 10-15 minutes. Season with salt and pepper to taste. Add the mangoes. Serve immediately over hot rice.