And the cookbook most likely to sit unsold is… 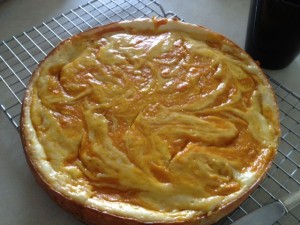 Read on and you'll find out about this mango cheesecake!

At the Friends of the Library Book Sale, where I’ve been helping with food for the hard-working volunteers, I made a careful reconnaissance of the cookbook area before we opened on Friday, and then another today.

I had two objectives: To see if anybody bought the first two copies of my first cookbook ever to appear at the book sale (the book is 7 years old) and to see which cookbooks should be nominated for Cookbook We are SOOOOO Over.

My cookbooks sold the first day. (Mixed feelings; no author wants to see their book in a second-hand pile but at least it went for a good cause.)

And the authors whose books qualify for my oh-so-unscientific poll are: Jeff Smith and Rosey Daley.

Smith, once among the hottest cooking show hosts on TV (pre-Food Channel days), fell from grace in a big way. (That’s kind of inside joke; he was actually a pastor who began as a cooking hobbiest.) But he blotted his copybook big-time by … well, it’s an ugly story. Let’s not tell it. More to the point, he began turning out cookbooks like a grillman at a pancake house and that always makes me suspicious. Nobody has that many really good cookbooks in them (she said, as she went to work on her fifth book). Although I knew him a bit in Seattle (he lived in Tacoma, Wash.), and found him charming in a bombastic kind of way, I don’t remember falling in love with any of his recipes. And, apparently, neither did a lot of other people. Because you can find his whole opus for like 50 cents apiece at the sale.

Rosey Daley gained fame by helping Oprah to lose a bunch of weight as her in-house chef and received a HUGE boost in sales from the Oprah-nator. But we’ve had boxfuls of the book to sell the last couple of years; can’t hardly give ’em away. Probably too narrow an idea. Or maybe the fact that Oprah has regained a good bit of that weight plays into it.

Anyway, I won’t be losing any weight tonight. A friend who lost the bet we made two weeks ago on the Pacquiao-Barclay fight is cooking us dinner right now: New Zealand sea bass, pasta, salad … and I made a mango cheesecake that has me puffed up with pride. We’ll see how good it is. If it passes the taste test, I’ll share the shamefully simple recipe.

It passed! This isn’t a true, from-scratch cheesecake but it is baked, it is creamy and rich and the mango shines through. I was particularly proud of one aspect: In the morning, I realized I had a) a bowl of ripe mangoes, and b) about a dozen oatmeal-coconut cookies I had baked a week before that were rock-hard but still delicious. I thought pie and crust. Then I thought cheesecake and crust. Then I searched the Internet, recalling a simple cheesecake a friend made using Eagle Brand Condensed Milk (one of few products that hasn’t changed a bit since my childhood). Here’s what I did:

Crust: One dozen crunchy cookies (oatmeal-coconut; find it in my first book as New England Oatmeal Cookies) and 2 tablespoons butter. Pulverize the cookies in a food processor, add the pats of butter, process to moist crumbs. You need an 8- to 10-inch springform pan (8 would be best but I’ve lost the bottom to my 8-inch pan, so went with 9, making a rather shallow pie). Press into a butter-sprayed springform pan.

Mango puree: Puree the flesh of 3 large or 4 smaller mangoes.

Preheat oven to 325 degrees. Bake the crust 10 minutes. Remove. Pour half the filling into the crust. Spoon a few tablespoons full of mango puree on top, in discreet circles. Use a chopstick to draw through the mango to spread and swirl it through. Pour over remaining filling and repeat with remaining mango to create attractive top. Bake at 325 degrees 55 minutes to 1 hour, until a knife in the center emerges clean. Place on rack to cool; allow sides to pull away from springform, run a thin-bladed knife around to release any adhesions. Release lock on spring form sides and remove. Refrigerate cheesecake, covered, until a few minutes before serving time.

You can make this with any precious lilikoi juice you might have in the freezer or any fresh or canned or frozen fruit puree. Or use lime juice and the rind of 1-2 limes and make a lime cheesecake.

PS: Booksale goes on until Sunday with books at greatly reduced prices the last three days. Still some treasures in cookbook section though most local cookbooks gone. Many, many, many, many novels and not everything has been put out yet. All shelves to be refreshed except the most fast-sellling. Records and CDs and DVDs, too. At McKinley High School. see friendsofthelibraryhawaii.org