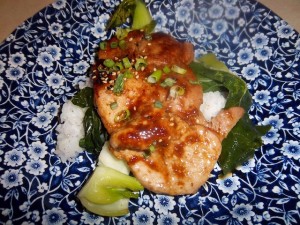 Lemon ginger pork: My creation, with charred baby pak choy and Japanese rice. No husband noice but it was oishi (delicious!).

When life gives you lemons, throw ’em at somebody. That’s kinda how I’m feeling right now. Or maybe, when life gives you lemons, let somebody else make you lemonade. And serve it to you. So cold it’s sweating. Preferably alongside the pool at a Four Seasons or a Ritz Carlton. While you lounge and a really delicious young man comes along and says, “Would you like a spritz?” And the dirty old lady in you thinks, “That’s not all I’d like, ab-boy.”

So this is how bad it’s been: I watched Mamma Mia the other day. This is my go-to, I -don’t-remember-when-I-last-felt-loved-or-appreciated movie. I laugh. I cry. I dance. It’s not pretty. But it works for me.

And then, for good measure, I watched an old movie you have to see if you have the heart of a romantic at all: Brief Encounter. So British. So touching. So stiff upper lip. So heart-rending. I cried. Felt a million bucks better.

Meanwhile, I am beginning work on two new books and I feel like I have twins. Just when you get one changed, fed, burped and down, the other one cries. And they’re very different books, so I feel schizophrenic. And so do I.

Made a thing I’m quite proud of and got another thing working that will either be wonderful or awful. Not sure and no time to work on it right this minute.

The proud thing is ginger broth: Just bring a big, sliced, no need to peel, hunk of ginger to a boil in 2-3 cups water. Turn it off. Steep and infuse. Use the broth instead of having to peel, cut, smash, mince or grate. Keep it in the fridge. Use it with dashi or other Japenese broth for soups or ramen or saimin or whatever. Doesn’t work for everything but I made a killer Yuzu Pork the other night with it instead of sake (which I didn’t have any and anyway, I try to keep booze out of the house or I’d drink whatever it is until I was insensible).

Here’s kind of what it was (because, on top of all that’s happened in the past two weeks, my hard drive died; lost two years of work; including last week). I’m sitting shiva and praying for a hard drive rescue miracle.

So I made a version of my favorite, a Japanese quick-fry called ginger pork, shoga(giner)yaki(fried) or sometimes buta(pork)yaki(really, it’s grilled on a flattop): 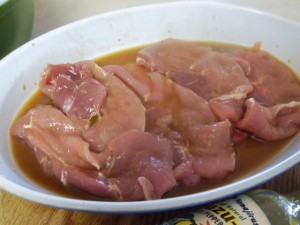 Pork in marinade; don't overdo. Less than a pound made two meals for two.

Yuzu Yaki One: Take some thin-sliced pork loin or pork chop. Very thin. Make a mixture of 1 tablespoon yuzu (bottled, more on that later), 2 tablespoons shoyu (Hawaii kine is sweeter), 2 1/2 tablespoons mirin (if you don’t got, use sugar), 2 tablespoons ginger broth, 1 tablespoon vegetable oil. Marinate one hour (don’t do it too long or the yuzu will cook the meat).

Get a frying pan really hot with 2 tablespoons peanut or vegetable oil. Drain and fry the meat very quickly (I mean two minutes max!) until it’s golden to brown, turn and repeat. Have hot rice ready. And the charred choy I talked about (or any leafy vegetable, oven-broiled to a slight, singed, brown crustiness with the thicker parts still tender). 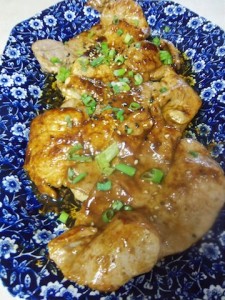 Is this not beautiful, or what? For a harried home cook, anyway.

Plunk rice on plate. Plunk greens on top. Plunk pork on top. You can drizzle the pan juices over if they haven’t burned.

Okay, now about yuzu. Yuzu is a Japanese citrus you can’t get most places outside Japan. There are bottled products, somewhat adulterated but not bad. I tried this with a product called Yuzu-It by Yamajirushi. Bad idea. Because, although I love the stuff, it’s a yuzu chili sauce, and the hot was a little wrong. I’m going to get some bottled yuzu and I am going also going to redo it with 1 lemon’s worth of zest in the marinade. Then you’ll get the lemon and not get hit with HOT on the second bite.

I didn’t get the husband noise. I got enthusiastic eating. Silent. I got eating all my leftovers. I got no noise. I am getting the damned noise if it’s the last thing I do. 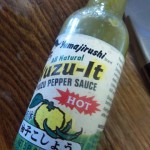 YuzuiIt. But don't, for this recipe. But if you can find some, get it. With sashimi, it's the bomb!

Shoga, by the way, is not ginger. It’s a cousin, a young, rosey bud of ginger-like something that you can’t get easily, either. But I don’t think the first time I had ginger pork it was shoga, I think it was superfinely grated ginger. And I can’t find my ginger grater (it’s a little ashtray looking thing of porcelain with needle-sharp points sticking up and you rub the ginger—and generally your knuckles—over it and get ginger that’s not fibrous but not as searingly spicy as ginger juice, which is what you get if you grate with a regular grater, then squeeze. To the person who put my ginger grater away in the wrong place, grrrrrr).

I can’t believe I’m giving yuzu-shoga-ginger lectures at 1 a.m. but I CAN believe that little cat thinks it must be dinnertime. Because for him, life is all dinnertime.