A tale of kale 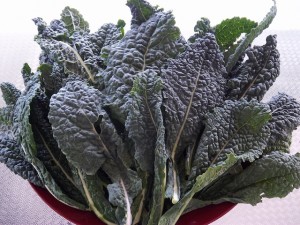 Boy was I proud of myself on Valentine’s Day! For a while, anyway. I planned a red main dish: Indian butter chicken, which has a tomato-based sauce, accompanied by cardamom rice (1 cup long grain rice, steamed with 2 cups water, a tablespoon of ground cardamom and 1/3 cup golden raisins).

For the “green” segment of the meal, I thought I’d get creative. In a fit of extravagance brought on by the purchase of a new book on Indian cooking some months ago, I had purchased half a hundred dollars’ worth of ingredients, including some cream-colored split lentils called urad dal. I consulted the cookbook and boiled these up with lots of fresh ginger, garlic, garam masala and cardamom pods and, toward the end of the cooking, threw in julienne kale. (Does it seem to you as though the entire state is on a kale kick? It’s just because we can finally get it here; local farmers are growing such wonderful baby kale, including varieties new to us, like the one above.)

The dal-kale stuff didn’t look like much but tasted okay in a healthy way. I served it. Husband, who rarely dislikes anything, reacted with an exclamation and a grimace. “Whoa! This kale is an acquired taste,” he blurted. Well, I’m sure I’ve served him kale before without any ill effect. I’m convinced he bit into a cardamom pod on the first chomp and got a hit of something that shocked his palate. He swears it’s the kale.

So guess what he’s getting as a vegetable tonight? Kale, sauteed in olive oil with lots of garlic. Ssssshhhhhh. Let’s see if it’s really the vegetable that’s the culprit.

Anyway, that dal-and-kale thing? Down the garbage disposal.