Bean there, ate that — rediscovering a snack that grows wild 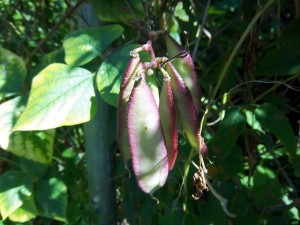 Papapa, an all but forgotten, nutritious snack.

The men in my family — both on the Portuguese and the English-Irish sides — are enthusiastic storytellers who love nothing better than to capture others’ attention, catch them by surprise or even amaze them. My cousin Anthony, 84, a retired Advertiser printer who lives in Kane’ohe, is no exception. “I’ve got something for you,” he said to me today with a characteristic air of mystery, a rascal smile and a flourish, producing a small wooden bowl of what looked like salt-crusted pebbles. (His other favorite is, “You’re not gonna believe what I’m working on,” but that’s another column.)

No, these aren't 'ili'ili (hula stones); they're papapa beans, a health-conscious munchie.

They were a favorite, and largely forgotten snack: papapa, the edamame of the old days. The brown beans (Dolichos lablab/Lablab purpureus), shelled, boiled and well-salted, would be served with tiny glasses of potent homemade wine or mugs of beer when Portuguese gathered for talk-story and brisk games of bisca (a trumps-like card game). Bitter, somewhat slimy lupin beans (aka horse beans) were also favored, but these are difficult to find now, and something of an acquired taste.

Papapa (macron over the first “a”), however, still grow wild, often unrecognized, the delicate vines draped over fences and crawling up the trunks and branches of fruit trees in Hawai’i back yards. The nutritious legumes — known by dozens of different names around the world, but most commonly loblob or hyacinth bean — grow wild from Asia, where they originated, to Africa. In hot climates, they produce their flattish, magenta-to-burgundy colored seed pods year-round; in colder climates, they’re recurring annuals. Their pretty lavender or white flowers resemble hyacinths.

The taste and texture of papapa is somewhere between soy beans, gandule beans and lima beans and, properly salted, they’re of the betcha-can’t-eat-just-one variety. Betcha can’t eat just one bowl, in fact. The leaves, early shoots and young pods also are edible; the leaves and shoots used as spinach would be, the pods resembling Chinese pea pods.

Cousin Anthony has papapa growing on his back fence, but it didn’t produce much this year. His neighbor, however, had a bonanza crop and allowed him to harvest the beans, which Filipinos call bulay or bataw and Japanese know as Fuji mame. The other day, he shelled five gallons; took him three hours in front of the TV.

“Papapa (he pronounced it, as many do, papape) grew wild in ‘Iao Valley. We would go pick, shell them and when we went to the movies, that would be our free snack,” he said. ” But his wife, Bev, recalled that the kids dreaded the appearance of the beans because the shelling would be their job.

If you get your hands on some papape, strip off the pods and soak the beans in water overnight. Boil them at a steady low simmer for 2 hours. Do NOT salt them until they’re tenderized; if you salt them beforehand, they’ll never get soft, Bev said. Then toss them with a goodly amount of sea salt. 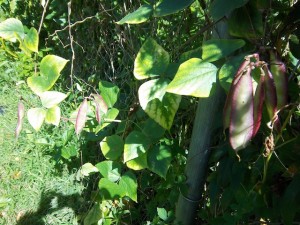 Papapa vine: Is there one in your back yard?

Lablab seeds for planting are readily available online if you can’t find a friendly neighbor. Plant them in full sun. Water but don’t drown them.