Up on the rooooof, on the roof’s the only place for … gardening! 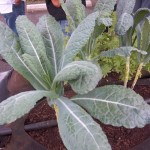 Baby kale destined for a rooftop garden in the center of the city.

Ask Alan Joaquin, president of FarmRoof, a young firm dedicated to making farm-fresh produce available for O’ahu residents. He’ll tell you that the  nutrient density of just-harvested vegetables is greater than that of produce that’s been shipped in from elsewhere. And besides, the flavor is often so different that it’s surprising. I thought I knew how yellow u’ala (sweet potatoes) tasted — bland, unremarkable — until recently when I had one fresh from a local farm at Mark Noguchi’s He’eia Kea Pier General Store & Deli.

Alan Joaquin of FarmRoof, with gardens in Waimanalo and now in Honolulu.

FarmRoof has been operating a small garden on the roof of the Sweet Home Cafe in Waimanalo for three years, selling a baby kale-arugula-Chinese mustard green mix to members of their community supported agriculture (CSA) subscription program ($10 a week for a weekly surprise basket from the farm). This blend of greens has been available at Whole Foods and is used by chefs such as Alan Wong (Alan Wong’s restaurant), Kevin Hanney (12th Ave. Grill and SALT), Vikram Gorg (Halekulani) and Alan Tsuchiyama (Le Bistro).

But the supply is temporarily slowed because now, in cooperation with the Kamehameha Schools, they’re bringing their wares to town. Wednesday, they held a press day to announce a plan for a roof garden atop the old CompUSA on Ala Moana between Keawe and Punchbowl. As the property owner, Kamehameha Schools helped broker a deal with the lessee, Automart USA.

Altogether, there are 38,000 square feet of rooftop (which you can only see from the air or one of the tall nearby buildings), partly planted now in FarmRoof’s trademark supergreen mix.

The plan includes a Farmers’ Cafe at 331 Keawe, across the street diamondhead. There, FarmRoof will host workshops, films and forums and will disseminate information on their efforts. They will also be working with Kamehameha Schools, which already had a commitment to create a sustainable urban environment on the lands they own in Kaka’ako. And Honolulu-side CSA customers can pick up their baskets. Or, if 20 persons in a single building in the financial district all sign up, they’ll deliver to the office.

Rooftop gardens sound like a great idea in a place like Honolulu, where many roofs are flat and there’s plenty of sunshine and rain. But you can’t just throw some soil on the roof, or even a bunch of boxes or planters, unless you’re willing to risk the roof coming down. Instead, FarmRoof employs lightweight “socks” to contain the soil and vegetables. These nylon-mesh containers, shaped like a split sausage, also release excess water, which is captured in a catchment system.

A FarmRoof gardener, whose name I neglected to get, said she growsgreens, tomatoes, cucumbers, squash and more, all organically, in Waimanalo. Joaquin said their most reliable success has come with heirloom vegetables, herbs and their “supergreens” mix.

One reason is the soil, composed of composted matter and other things and outfitted with 70 different minerals and trace elements. They’ve been working with Dr. Corilee Watters at University of Hawai’i to document the nutritional content of their produce and perhaps to create a roof garden in a UH laboratory building.

Joaquin’s advice to anyone who is interested in this project and the produce is to go to www.farmroof.com or to call (808) 396-9454 to sign up for the Community Supported Agriculture plan so you’ll be ahead in line when the garden starts producing.