Making the dietary left turn and letting standards slide for once 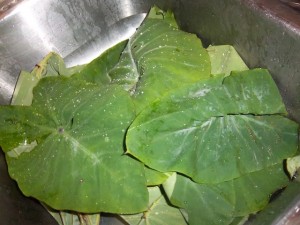 A sinkful of taro leaf: I love the drops of water glistening on the leaves. Don't forget to cook at least 45 minutes to avoid the "itchies."

The refrigerator is full with bits of this, bits of that: leftover Christmas chicken, some pumpkin puree from baking, cranberry sauce, the remnants of “take plate” from parties. I’m committed to trying to use it all (except maybe the week-old cake and avocado pie).

Tonight: pumpkin pasta (there are many alternatives to the traditional pumpkin-filled ravioli, which I wasn’t about to tackle on a day when I feel like a wrung-out towel.

I’ve got almost all the ingredients for every one I printed out and I’m going to see what I can substitute. (I’m NOT going to the store for one bottled of sage leaves (called for in a traditional Italian paring with pumpking. I won’t use again until it’s turned brown and I have to throw away $4-$5 dollars. It’s just something I don’t use enough.).

Another culinary why? Why can’t spices readily be bought in bulk in Hawaii. Or the opposite of bulk, meaning you could buy a tabelespoon in a twist of paper.

This is morning; When I cook later, I’ll append the recipe if it’s a success.

Grab on to any motivation you have to slim down your diet while using up the excess in the refrigerator and larder. It’ll be gone by Easter unless your motive is a deep-down one. 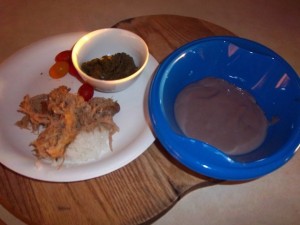 Not pretty but such a lovely pa'ina for two.

Our New Year’s dinner was a no brainer: Store-bought kalua pig and poi; home-cooked luau leaf made with the bones and its of the Christmas chicken and just a touch of coconut cream; rice. On paper plates. In front of the television. An occasional lowering of the standard benefits both the cook and the dishwasher.