Kala mai: In the Portuguese Pupu recipe a couple of posts back, I neglected to say when to put the garlic in (some people would say anytime and  often!). The recipe has been corrected now. I’ve learned to downsize pix so pix will be returning. My injured fingers are numb at the tips so typing still isn’t as natural as it was, but, Lord be praised!, they’re totally healed and the wounds are barely visible. I STILL want my own Cuisinart immersion blender but something tells me it’s the LAST thing my husband is going to give me. We’ve had to make one too many visits to Queen’s ER over the past few years!

One of the faithful readers of this blog sent me a really delicious-sounding recipe for Meyer Lemon tart and my Meyers are ready so that’s my next big project. 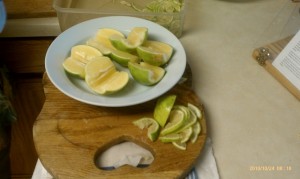 Meyer lemons: larger and sweeter than standard lemons — these will become a not-too-tart tart.

After January 1, it’s back to serious job searching: If you know anyone who needs a writer, editor or personal assistant (my favorite type of work; I like problem-solving), send ’em my way!

Earlier this week, I opened an unexpected package and let out a shriek of delight. Some of you will recall my dear friend, the late Advertiser columnist Maili Yardley, author of many classic Island cookbooks. Her daughter, Laura Kealoha Yardley, sent me a package of ancient books from Maili’s massive library. I was so honored. 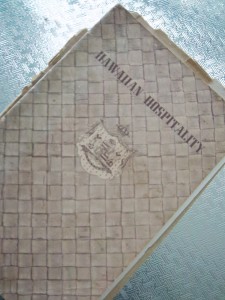 Hawaiian Hospitality; a treasure from an old friend.

My favorite so far is “Hawaiian Hospitality,” published in 1961 to honor The Garden Club of America. WOW! I’ve seen it but don’t own it. It’s little more than pamphlet but it’s got some of Maili’s own notes in it and some surprisingly interesting and easy recipes beyond the usual. It’s also quite eclectic, ranging from avocado cocktail sauce to beef tomato to guava muffins. 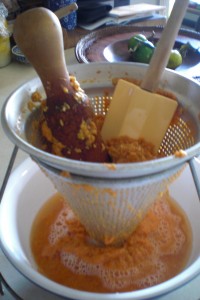 Here’s one you might want to try at the Christmas table, especially if someone gives you some homemade guava jelly or jam:

8 medium sweet potatoes, peeled and cut into slices or chunks

1 cup guava jelly or jam (the jam will be a bit thicker, you might thin with some water)

Sounds ono and so easy. Plenny calories, but.