Back from Hilo but must make one bow to my favorite, favorite, favorite Hilo institution: Kawamoto Store, a family run operation in a space that used to be a produce shop, then turned into an okazyu, then changed hands from the Kawamotos to a Hawaiian family, but has maintained its homespun quality all that time.

It’s an okazu-ya in the old style and I would rather eat there most days than any white tablecloth restaurant of my acquaintance.

For $3.90, I got a lunch that I savored as a wine connoisseur savors a fine vintage: Korean chicken (because they were out of Hilo’s famous nori chicken), a couple of diminutive cornbeef-potato paties, a triangle of rice and some battered and deep-friend Molokai sweet potatoes. Went back to my hotel room and just acted like a fool: sniffed and munched and photographed and savored. Ate that thing for two meals.

Had a lot of good food, Hilo-side, but Kawamoto’s? I’d ask for them for my last meal if I was on death row. No kidding.

At home, responsibilities crashed down on me and I’ve been scurrying to catch up (hint to those who are listening: do NOT ever consent to serve on your condo board).

But yesterday, there was a family party for a lovely lady who had attained a certain age (she’s NOT telling). This close-knit family on my husband’s side served a very healthful meal: grilled chicken and sausage, brown rice, steamed broccoli. But that barbecued chicken really got me: It was delicious! What was in it?

Playing riddles with the son of the family while he was a the grill, I guessed and guessed. Wrong!  Here’s what they do:

Half a lemon (juice of)

A good amount of chopped basil

It’s a family standard for this social group who live just steps from Kailua beach on one of those long, narrow lots off that house two or three houses with easements down to the water. While the briquets glow red and ash over, and the light begins to wane, we all troup down to the beach for group pictures — couple, babes in arms, family groups, the camera on a timer so we can capture the whole gaggle of us. We are a mom (her birthday — she’s not telling which!) is the occasion. Two of her daughters. A daughter’s ex-husband and the ex-husband’s new wife. Two grandsons, cousins, not brothers. A granddaughter and her husband. And the stars of the evening — who appear, twinkling, briefly, because they’re mostly napping — the great grand-children, the twins who have been living with us. A typical Island extended family. 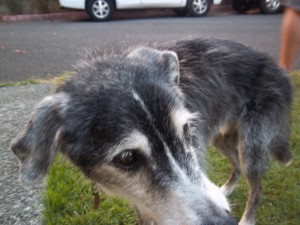 Lucky: Lucky he live Hawaii, Lucky he so loved, Lucky get scraps from the table. Better than the food at the barbecue was being visited by Lucky for a pat and a little love session.

Oh, and the dog, a charming, spiky haired, half-blind fellow older than the Great-grandma in dog years, who wanders about, genially greeting everyone, stopping suddenly so that you almost trip over him, alternately sitting, lying down and rising painfully. He is at least as much a topic of conversation as the twins. His name is Lucky and he’s had a life befitting his name, and we know he won’t be with us forever.

Lucky loves barbecues. I hope there’s one for him in doggie heaven when he gets there.