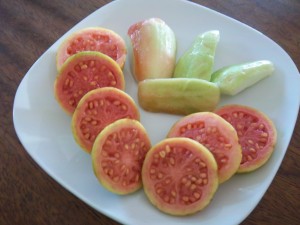 What unthinkable thing did I do?

I paid for guavas. One whole American dollar.

Shed’ be shocked. I don’t think she ever paid for a guava, a papaya, a mango, a mountain apple or a waiawi in all her long life.

If you wanted guavas in Grandma’s house, you just reached out the kitchen window. No exaggeration. Somebody must have dropped a guava out there one day, because a volunteer grew up among the shrubs and Grandma cleared a way for it. As a bonus, it was a supremely sweet white guava. Our home high in the valley was surrounded by woods where wild guavas flourished for Grandma’s seasonal jam-making. The problem was one of abundance, picking and picking and picking, being attacked by mosquitoes and bugged by flies (feeding on rotten guavas at your feet)

Indeed, in the 1960s, after we moved from Wailuku town to ‘Iao Valley and Grandpa planted an immense garden, our yard even yielded citrus — limes and thin-skinned oranges — as well as precious figs. Anything we didn’t raise was likely to show up on the back porch, stealth gifts from neighbors and relatives.

A couple of weeks ago, wandering the flea market, I spotted a plastic clamshell filled with guava slices and another — praise be! —of sliced mountain apple, sitting on ice. I hadn’t had a mountain apple since our honeymoon in Hana nearly 10 years ago. I might get a few bites of guava a year. And it was so hot, and they looked so cold and refreshing. . . Forgive me, Grandma. (BTW, later in the same shopping excursion, I spotted large, green guava and bought a couple of those, too. They never changed color but when I cut into them, they were ripe, bright pink and quite sweet. I put them in a salad with balsamic vinaigrette. My garden-savvy friend Heidi Bornhorst told me it was a new variety to Hawai’i. 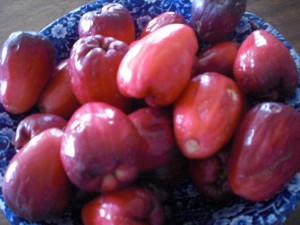 But these mountain apples — from a friend's tree last year — were free, just like in the old days.

I know one shouldn’t live in the past or eternally lament it. On the other hand, as I wrote once in a column I wrote for The Advertiser, “if I’d known nostalgia would be so much fun, I’d have gotten old faster.” And those times when fruit was free needn’t be completely gone. Even if you don’t have a yard, you can grow your own fruit with the aid of the many dwarf varieties now available. We’ve got a dwarf fig tree from which we get a handful of fruit two or three times a year (so satisfying when fresh figs are so rare and expensive). And a dwarf Meyer lemon that produces a bonanza of fruit a couple of times a year. Both grow in pots alongside our front sidewalk. Lanai-friendly mango “bushes” are available, too. Consult a master gardener at the Urban Garden Center in Pearl City or go check out garden spots such as Frankie’s Nursery in Waimanalo (www.frankiesnursery.com).