BREAKING NEWS: Double click on thumbnails below to see a picture gallery and read about this morning’s Mangoes at the Moana event:

Tomorrow: Mangoes at YOUR house.

ON TO CHINATOWN: In the past year or so, my trips to Chinatown have been quick missions: Park the car, run to specific shop, pick up whatever and head out.

So it was that, Thursday, when I had an hour to spare and actually spent some time wandering Maunakea and Hotel Streets and Kekaulike mall, I saw much that was new and noted a number of changes.

Not least among them, Yusura, one of my favorite little Japanese restaurants, at 35 N. Beretania, has closed. A sign says it’s under new management and being renovated. I used to get a kick out of sitting there nibbling on wonderful handmade gyoza, listening to people speaking a Chinese dialect in the kitchen. They were an exceptionally good simple, inexpensive Japanese restaurant run by Chinese — used to buy their gau and almond cookies at Chinese New Year’s Time. Bummer. 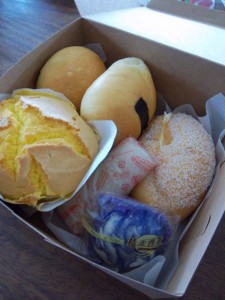 I Love Country sampler: a taste of Chinatown.

On Maunakea, I popped into the I Love Country bakery, thinking it was new. Embarrassed to be told it’s been there two years. Never noticed it before. I’m usually rushing to pick up some piece of kitchen equipment at Bo Wah, or a Chinese greeting card at China Arts or macadamia nut sesame candy at Sing Cheong Yuen. Must’ve walked right past it. 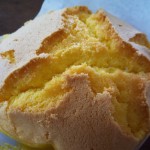 I decided to make up a mixed box and see what tasted as good as it all looked. Ran around pointing while a sales associated filled the box, spent about $8 and came away with an afternoon of snacks.

Can’t say I was blown away. An oil-free, oversize golden cupcake called a Chinese wedding cake (not to be confused with the molded pastry ones) was disappointing; dry and relatively tasteless. The banana roll tasted like nasty artificial bubble gum. 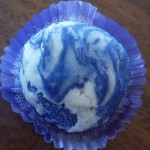 Purple mochi, pretty but not too tasty.

A purple sweet potato mochi was gorgeous but floury and crumbly and yielded little flavor. I had great hopes for a huge, puffy bun sprinkled with coconut and full of some kind of coconut cream, but, though the cream had a sybaritic texture, again, pallid flavor. 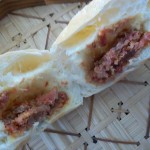 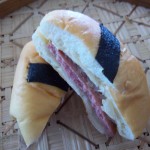 Perhaps predictably, it was the two most mundane of creations — a char siu baked bao and the SPAM musubi bao (one slice SPAM in the center of a big, puffy bun) — that tasted the best. They were the only two that I kept to eat after taking my first tastes.

Tomorrow: Mangoes at YOUR house.