What I got for Christmas: recipes 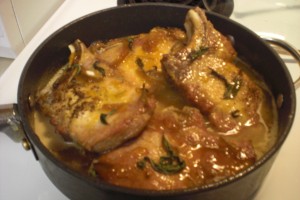 Okay, so Grandma and Grandpa didn’t miraculously rise from the dead to make my Christmas wishes come true. But I did get every material thing I asked for (it helps if you make very specific lists and give them to people well in advance).

But beyond “stuff”, I got a lovely evening with my daughter, phone time with my mom, a husband who actually liked what I gave him and a couple of new recipes.

First, Wan-chiladas. Daughter is a picky eater (how did I raise a picky eater?). She remarked offhandedly at dinner that really, she does like my cooking, it’s just that, in everything I make there’s one wrong thing. (Only the child of your bosom can say stuff like this with seemingly no idea that they’re carving your heart out.)

She was referring to the corn I put in the enchiladas. Enchiladas I made especially for her. The recipe came from Annie’s Eats (http://annies-eats.com). Annie calls ’em “Benchiladas,” in honor of her husband. They’re much easier, if less authentic, than the ones I usually make: flour tortillas filled with poached chicken breast, sour cream and ranch dressing and baked with salsa and cheese on top.

Daughter LOVES ranch dressing (she puts it on pizza) so I was sure I couldn’t go wrong.

Of course, I had to do things my way: chicken thighs instead of breasts (much more flavorful and moist), onions lightly cooked in the chicken poaching liquid (gotta have onions), corn (because I love corn in anything), whole wheat tortillas (bad idea; they were hard and got harder in the baking; use flour tortillas), cheese and, on top, cheese and canned enchilada sauce (VERY bad idea; I usually make my own — it’s easy — and the canned stuff was horribly salty to my taste). The ranch dressing was not at all weird, as I had feared, but added a certain richness. Don’t know what a Mexican would say but Daughter said, in effect, “Un otro, por favor.” (“Another, please.”)

After Daughter’s backhanded compliment on my cooking, I licked my wounds for a couple of days, serving up little other than leftovers. Tonight, I returned to the kitchen and emerged unbowed.

With Meyer Lemon Chops. You may recall that I made Meyer Lemon Marmalade earlier this year. This complex and bitter-tart condiment is nice enough on toast, but I had been thinking for some time that it was destined to make love to pork. Tonight, it did.

1 cup chicken broth (or white wine, if you have any)

3/4 cup Meyer Lemon Marmalade (any marmalade can be substituted)

1/3 cup whipping cream (I actually used some leftover over unsweetened whipped cream that had been sitting in the fridge since Christmas Eve when I served it with pumpkin crunch; it had “turned” just enough to be interesting) Try sour cream or Greek yogurt if you like

This is what Husband thought of it. 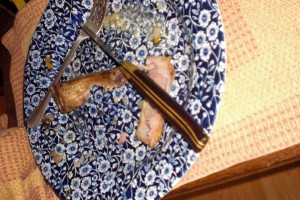 What the cook loves to see.