Planting the seeds of agricultural change in the Islands: ‘Ingredients Hawai’i’ 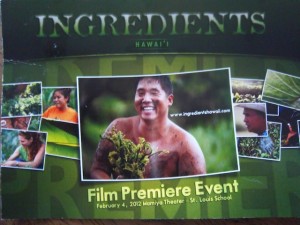 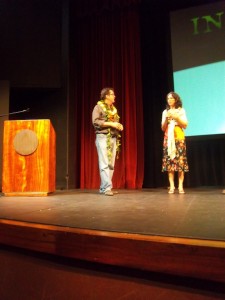 Filmmaker Bob Bates and gardening experts Fran Butera on stage at the premiere of Bates' new documentary, "Ingredients Hawai'i": Go get your shovel and some old clothes!

Twenty years after the Hawaii Regional Cuisine chefs group set out to improve the numbers, we still import 92 percent of the food eat here in Hawai’i. But that can be changed. It should be. It will be.

That was a central message Saturday night as filmmakers Robert Bates and Brian Kimmel debuted their new short documentary, “Ingredients Hawai’i,” an Oahu-centric look at developments in agriculture, organics, culturally sensitive farming and home gardening that is meant to be the first in a series covering other islands as well. An overflow crowd of farmers, chefs, restaurateurs, gardeners, cultural practitioners and land-and-sea activists filled Mamiya Theatre for the first showing at 7 p.m. And many stayed afterward for a talk-story session with some of those featured in the film.

In scenes as gorgeous as a Ko’olau sunrise and juicy as a fresh guava, the filmmakers and their sources contradicted the widespread notion that farming is a thing of the past on O’ahu, that the sights and scents of farm life are gone from Hawai’i’s crowded urban center.  “I didn’t know this was here,” people tell Windward side taro farmers and Waimanalo rooftop gardeners. 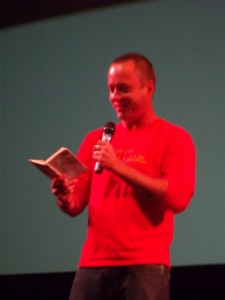 Restaurateur Ed Kenney consults his notes on the new film; the scenes that most moved him.

During the film, the audience listened to chef-owner Ed Kenney of town and Downtown@the HISAM restaurants talk about gardening at home with his children; the kids do much of the work, bringing in their harvest each evening for family dinners. He praised those who, as they seek to change people’s ways, yet accept them as they are, even if where they start is an energy drink and a musubi for breakfast.

The audience saw students at Waikiki School tending their garden; the youngsters decide what will be planted, evaluate the crops and winnow them down to the most desirable choices, plant some more, weed, mulch, harvest and, yes, eat. The effort is proving that kids will eat good, fresh food, said garden coordinator Debbie Milliken. “We have this idea that there’s kid food, and kid food is pepperoni pizza and hot dogs and that’s not true.” Her students actually clamor for kale smoothies.

They heard interns at Wai’anae’s MAO Organic Farms talk about their dawn-to-dusk work (one shot shows them harvesting before first light, with head lamps to guide their way). The labor is rewarded with college scholarships and stipends. And life change. Ku’ulei Samson said she didn’t know much of the food she grows existed: tatsoi and kale and arugula were foreign to her. Now she sees how land that once was farmed by her ancestors can be worked again, for the good of the whole community. “It gives you something to do when you got nothing to do,” she said, and in this simple statement was contained much of the philosophy underlying MAO: to raise up a community that has been downtrodden, dead-ended, riddled with drugs and crime and boredom.

Home gardener Jenny Engle talked about her pride in the fact that her children only occasionally see the inside of a supermarket: Their food comes from their own garden, from community supported agriculture (farm basket programs), farmer’s markets. “The first time you plant a seed and you see it sprout, it’s a simple thing but it’s . . . moving,” she said.

Viewers saw loads of produce that would otherwise be trashed being picked up by trucks from Aloha Harvest and distributed to those in need. A common misconception is that it’s illegal to recycle food in this way; farmers, grocers, restaurateurs would bear liability. Not so; it’s legal, it works and it goes directly against the belief that poor people can’t afford to eat fresh and local. Aloha Harvest has no storage facility; they glean daily, and distribute daily.

Hi’ilei Kawelo, executive director of Paepae O He’eia, which is attempting to rebuild and restore a fish pond at He’eia, acknowledged the daunting factors in the way of such efforts: The pond has been ignored for 100 years, streams that used to feed it afresh have been diverted, kalo fields have disappeared, silt and introduced seaweeds clog the ancient aquaculture system. “We don’t know if we can improve the water chemistry,” she said, sadly. But they’re trying.

Alan Joaquin and others associated with FarmRoof, which has developed an organic rooftop gardening system, talked about how tiny Sweet Home restaurant in Waimanalo is able to serve 100 people a day from just the 630 square feet of space above the dining room ceiling. Joaquin said a survey showed that downtown Honolulu and Kaka’ako alone offer more than 1.7 million square feet of such space; a new facility just went into place at the old CompUSA building on Ala Moana Boulevard.

Fran Butera, gardener-in-chief of Foodscapes, home gardening consultants, spoke enthusiastically of the benefits of growing your own and how it can fit into a modern, busy, even urban lifestyle. They visit people’s gardens and, among other things, leave behind a journal of osbservations, suggestions and ideas so that, even when the kids are in school and Mom and Dad at work, they can get good direction for their gardening efforts.

During the talk-story afterward, Derrik Parker, who has worked the farm for several years, earned his liberal arts degree and is now studying voice and music at the University of Hawai’i said his time at MAO taught given him a sense of belonging, and giving back. “I’m not just here, I’m from here, I’m a part of this place,” said the Wai’anae native. “We are not just existing, we are living. Are we helping each other to live?”

Butera noted that it’s only in the last generation that gardening has become something of a mystery; prior to that time, most Island homes featured a worked patch of earth — entire yards were lawnless, populated instead by fruit trees, herbs, vegetables. You don’t need much, she said, “a shovel, some old clothes, some old shoes,” an understanding of the sun and soil conditions of your own growing space (which can be a lanai bordered with pots), a little reading and some talk-story with your green thumb neighbors, and then, “stop stalling and get down and do it.”

Hawaii Regional Cuisine chef Roger Dikon, newly returned to the Islands after 17 years away, rose to compliment everyone who had worked so hard to change conditions since the days when he had to grow his own herbs for his hotel kitchen on Maui, and beg farmers to put in a few rows of lettuce for him.

Kenney complimented his former town colleague, Mark Noguchi of He’eia Pier General Store & Deli for what he called “the quote of the night.”

Chef Mark Noguchi had the quote of the night, but you kinda had to be there!

“(When) no mo fish. No mo fish.” It was another deceptively simple summing up, this time of the commitment it takes to accept the challenge of buying and eating local. When “no mo fish,” use Kuahiwi beef, or locally made tofu, or taro grown within a mile of the restaurant.

And he reported that, after six years, an audit of food purchases for town and Downtown showed that the two small restaurants are buying 47 percent local and contributing more than $400,000 to local farmers’ coffers.

A view who is active in Sierra Club challenged the audience, saying that at a recent hearing about two large, proposed housing development projects, developers said people on O’ahu don’t care about green spaces, and even used the activists’ success against them (if you grow your own, or have rooftop gardens, you don’t need farms!).

Which puts the seed packet — or lack of it — right into your palm. Do you care? Do you believe it’s important to eat local and fresh? Will you be a planter?

Go to www.ingredientshawaii.com to find out about downloading film or purchasing DVD; details still being worked out but you can find out more there. Also: Most of the restaurants, farms, etc. mentioned in the film have their own Web sites; just google ’em if something strikes your intersest. I’m going to be calling Foodscapes, edible landscaping experts, on Monday: www.foodscapeshawaii.com.