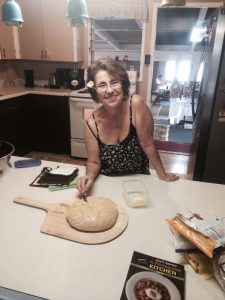 Making broa, yeasted Portuguese bread, in my brother’s kitchen. (Look for a future blog on his baking prowess.)

Her job of love was at the late, lamented (by her, anyway) Honolulu Advertiser where as food editor she got the chance of her life when she was asked to write a history of food through the pages of the then-150-year-old newspaper. The result was the bestselling 2005 book,  “Island Plate, 150 Years of Foodlore and Recipes from The Honolulu Advertiser.” She followed this with Island Plate II and three other books of her own and two for which she acted as editor.

Her latest was the work of more than a decade, or perhaps you might say all her life: “Hawaii Cooks: A Portuguese Kitchen,” for which she interviewed dozens of Portuguese American elders and studied the history of this odd-to-be-in-Hawaii culture. 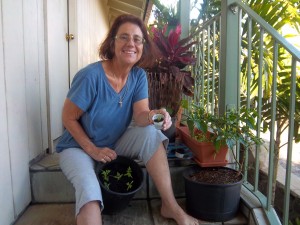 Garden girl. I kill everything but Portuguese cabbage.

Forcibly and gleefully semi-retired, Wanda continues to cook every day, collect community cookbooks and cater to volunteers at the annual 10-day Friends of the Library book sale. She has also adopted a new career as a companion/caregiver to elders (and of course she cooks for clients).

Wanda is primarily a food historian (a friend, the late and justly celebrated Advertiser columnist Bob Krauss, assured her it was okay to claim the title even without a formal degree; “You do the work,” the gruffly encouraging Krauss said.) 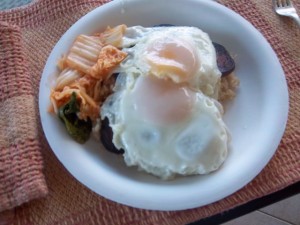 “Even people who have lived here all their lives don’t know why half the dishes we think of lu’au foods are not of Hawaiian origin, why we eat Saloon Pilot crackers, how our fierce loyalty to SPAM developed, how many of our most favored eat-out/take-out/snack-out foods are made or where they originated,” she says. “Even the signature dishes of arriving cultures have been profoundly altered here, as immigrants to the Islands ‘made-do’, and as our tastes were changed by our close contact with each other.

“I stand metaphorically in the slippers of thousands of women and men in ill-fitted plantation kitchens, cooking on kerosene stoves made from tin cans, baking bread in outdoor masonry ovens, tending gardens of vegetables descended from seeds babied by plantation contract workers through long sea voyages, learning to use native ingredients, “canoe foods” (brought by South Pacific voyagers) and ethnic imports although in their own ways, serving as cooks in the kitchens of the elite and thus creating a conversation between East and West.

“And I was blessed to meet, talk and drink with, and eat the creations of, the mostly FOB (fresh off the boat) chefs of the ’80s and ’90s who took notice of what had long taken for granted. They applied classic European and Asian technique to local tastes and ways, altering our plates, and the opinion of the world about Island food.”