Local food deep-fried and supersized: It’s good to be bad 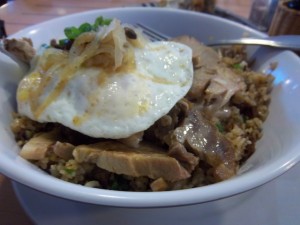 Da Kitchen's pot roast pork moco; just back up the truck for this mondo portion.Da Kitchen is a Maui favorite I visited recently — remember me slavering about the deep-fried SPAM musubi? — and they've come to O'ahu now, across old Stadium Park at 925 Isenberg (next to Maple Garden).

OOOOPS! I thought I posted this Thursday night. So here it is!… PLEASE NOTE: I posted twice today — see the one before this if you like caramel and butterscotch!

Having savored a melting misoyaki butterfish on the Valley Isle, I wanted to check out the Honolulu outlet of Da Kitchen, to see how they compared, so I stopped by for lunch today.

Well, Sam Choy, move over. You no longer hold the record for the largest volume of leftovers I’ve ever crammed into a takeout container.

On Maui, I had noted the almost unfathomable portions on the Hawaiian plates being enjoyed by some construction workers at a nearby table (not the usual speck of lu’au leaf, tablespoon of kalua pork, tiny cup of poi but the — sorry, Sam — bambucha servings you’d expect at a family lu’au). But when I ordered the daily special roast pork moco today, I truly didn’t expect a bowl suitable for mixing an entire batch of cookies or salad for an entire family. (Although the hefty price, $15.50, should have tipped me off.)

I had already eaten half a panko-crusted musubi ($10, generous enough for two). When the waitress set the supersized moco down, I actually “came shame” and turned red. I imagined I could read the thoughts of the three bank clerk-looking guys in reverse-print aloha shirts next to me (I mentally dubbed them Wendell, Milton and Hama): “Wot? Hungry???” (Why do I care so much what strangers think instead of, say, what the guy who stapled my stomach might think? Perhaps because I know what my doctor would say: “NOOOOOOooooooooooo!”) In the end, I brought home a full takeout container, enough (with a baked sweet potato and a salad) for dinner tonight and lunch tomorrow for my husband and for small-eater me. 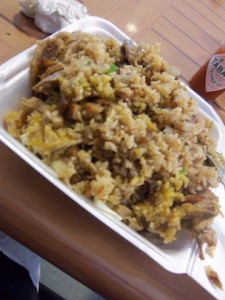 If you can believe it, these are my leftovers; one dish, four meals!

But that’s not my measure. My measure is whether I want to visit the restaurant again, whether a dish is a good example of its kind, whether I take my leftovers home or forget them on the table. By those measures, Da Kitchen easily attains the level of some of my other local food favorites (Dean’s Drive Inn, Kahai Street Kitchen, Side Street Inn) even if it’s less “chefly,” more “da kine.”

Let’s back up for a second to the Tempura Musubi: Though it was featured on TV as something weird and wonderful, it doesn’t take much imagination to come up with the idea of deep-frying such a common Island favorite, given that we live in a world where people are deep-frying Twinkies and poi-mochi balls. 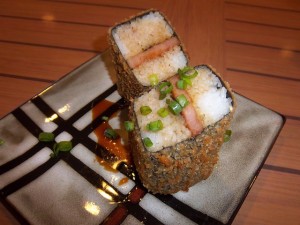 They'll deep-fry anything these days, yeah? Even musubi (I can't think WHAT Manabu would say!).

The question is: Does it work? The answer is not so easy. It works when the dish is served immediately out of the fryer (it was, both times I tried it) and the oil in which it is fried is absolutely fresh (I thought the second sample seemed a bit old-oil-flavored). Setting aside the obvious — that EVERYTHING tastes grand when it’s hot and crispy — I’m not sure this is a combo that really makes any sense because what you CAN’T taste is the musubi — the tender rice, the salty SPAM. The most you get is a quick hit of nori. Would I order it again? Probably, yes, as a munchie, in a group with everyone sharing bites. But on its own, I’ve been there, eaten that, and I’m moving on.

The roast pork moco, on the other hand . . . was heaven — moist but not greasy fried rice choked with chopped goodies, including veggies and char siu, slices of moist roasted pork, a couple of over-easy eggs and some lightly caramelized onions. There was nothing to say but thank you, Lord.

I LOVE roast pork. In ancient times, when The Advertiser of sainted memory had a popular cafeteria open to the public, people would come from all over downtown when the daily special was roast pork with brown gravy or roast turkey with white gravy. I don’t recall the chef-owner’s name but his cooking was solely responsible for my supersized middle and hips in those days. His roast pork was so tender that a toothless elder could enjoy it. And the gravy was real, not chemical.

It’s an interesting dish as it’s made in the Islands: Chinese, but not really Chinese. Real Chinese pot roast pork is made with pork belly, but this didn’t look like pork belly. Chinese roast pork such as you find in Chinatown, in the glass case with the char siu, isn’t the same thing, either. I’ve been paging through all my community cookbooks trying to better understand this East-West dish. What cut of meat is used? Which seasonings (looks like bean sauce, black shoyu, five-spice or star anise)? Roasted? Steamed? Looks like roasted by a moist heat method; covered, in the marinating liquid.

Anybody got a great pot roast pork recipe (kau yuk but with a pork butt roast or something like that)?????