Maui: As much as the food, it’s about the people-watching 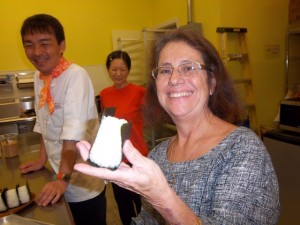 O-musu-me! Sorry, no photo of man in skirt so here's me with an omusubi ume that I made myself under the instruction of Manabu and Fumiyo Asaoka.

The other day, I’m getting on the plane to come to Maui and there’s a guy in a skirt. A gray gored skirt. And not a swishy guy, nothing Brad, Brad World or Project Runway about this guy; he was tough-looking, with lots of wicked tatts and longish ’70s hair. But then there was the skirt (and it wasn’t even a skort; I anabashedly stared at his legs to be sure) and a pair of delicate, feminine sandals made of bright red twine. And then he sat down in the rental car shuttle bus with his legs apart, the way a man will sit, but he had on this skirt and . . . no, I didn’t look because I was, frankly, not ready for a Jockey flash. (Or worse.)

Then I’m driving up Main Street to Mom’s and there’s this guy in a bright yellow outfit crazy-dancing all over the sidewalk with a sign advertising Zumba classes. Next day, it’s a different guy in a sort of sultan outfit, gold with cheetah skin or something. More sidewalk Zumba.

And, forgive me, Husband, but … it’s ABOUT the good-looking men. (Although one does have to wonder what they’re all doing drinking coffee and texting in a coffee shop at 10 a.m. on a workday, looking like they have not a care in the world — as in, no job.)

I don’t know if it’s just being on something of a vacation or if the Reyn’s shirt faded print city scenes that are my daily fare have made me extra sensitive, but everyone on Maui seems to be painted sharp relief with primary colors. There are so many types: yoga girls with dreads, not a curved surface on their bodies and more piercings than I have numbers on speed-dial; MauiBuilt titas in trucks you need a ladder to get into (no wonder they wear platform slippahs); German tourists (LOTS of German tourists) in sensible clothes and backpacks; hippie remnants with gray hair tangling their tie-dyed shoulders and happy dogs hanging out of their car windows. I am not making this up. I’ve seen all these just sitting here at the Wailuku Coffee Company on Market Street for the last hour.

Last night, I met a guy whose last name is the same as my grandmother’s though he’s no relation. But when he spoke, I knew he was Portuguese even before I knew his name. This was both because of his accent and because he was talking about his house; how his cleaning lady had come that day, and the window cleaners, too, and how he couldn’t wait to get home to his spotless house. Portagee, I said. It was a social occasion, so I went up to talk story and we sped down memory lane like ’60s teenagers in a classic Mustang.

We remembered every business on Main Street, every theater, fish shop and bakery, every politician and colorful character we could dredge from our puka-puka memories. Mayor Eddie Tam with his Cadillac convertible (he remembers the yellow one; I remember it was mauve, because that’s where I learned the word). Publisher J. Walter Cameron with his bright white shirts and the Panama hat that always rested on his knee when it wasn’t on his head. All the hard-drinking Daddies and Uncles who sat out in the garage eating pupu and telling WWII tales. The gangster who ran the town gambling hall and literally had yakuza from Japan guarding the cash (he was our next-door neighbor). The scary old man who had the concession stand at ‘Iao Theatre (great boiled peanuts but you had to have some galas to go in there). The manapua guy at Wailuku Hongwanji. The Golden Jade restaurant where we used to pick up Chinese food in our own kaukau tins (the Chee girls went to St. Anthony with us and they probably all got doctoral degrees because the Jade is no more). 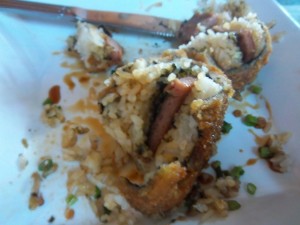 Kala mai! We demolished the fried musubi at Da Kitchen before I thought to take a picture. It was crunchy good even as a cold leftover.

Meanwhile, I can recommend the IMMENSE portions and great flavors at Da Kitchen (begun on Maui but now also on O’ahu in Mo’ili’ili, I think). Had lunch there yesterday and just had to order the deep-fried musubi. Braddah, it was worth every newly filled fat cell on my opu nui. Great misoyaki butterfish, too! And the Hawaiian plates were not the usual stingy portions but HEAPING, like three laulau, no kidding.

I also have been enjoying almost daily the coffee and the food at Wailuku Coffee Company. I had a turkey-cranberry-chevre-veggie wrap today that really hit the spot, not a combination you get often. It was supposed to have avocado but the fruit weren’t ripe so they did me grilled red peppers instead. Free WiFi for 60 minutes. Breakfast, juices, sandwiches, salads, desserts and everything I’ve tried has been good.

Almost as good as the people watching.