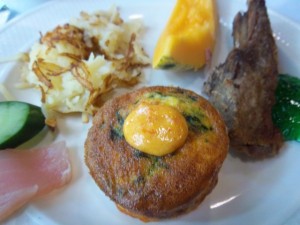 Brunch at Hale Koa, a miniquiche with tomato mayonnaise (I think), hash browns, papaya and some PERFECT lamb chops. (But they still serve them with mint jelly, so old-fashioned.)

I have been so involved with work and study that I haven’t been cooking much. Also, Husband has taken to eating his big meal in the mid-afternoon, so he doesn’t want dinner anymore. I’m bereft, although this is a healthier way for him to eat. He’s not trying to sleep and digest at the same time, a sure way to put on weight.

I’ve had to become creative with his “lunches,” which need to include a breakfast (usually two whole-grain toaster waffles made into a sandwich with peanut or almond butter; he is not a person who cares about temperature so it doesn’t bother him that it’s cold), fruit and nuts for snacking or an energy bar (I love Kashi Chewy either cranberry-chocolate or flax-oatmeal-almond; they are 140-150 calories and make me very, very happy when I’m jonesin’ but can’t sit down to eat), peanut butter and jelly sandwiches also serve as breakfast as do baked, those thick fingers of bread-like, raisin-flecked energy bars you can buy in large bags at Costco and such (I freeze half, leave half on counter). Oh, and he’ll eat cereal (especially shredded wheat) as though they were a snack. GOT ANY MORE LUNCH OR DINNER IDEAS FOR HIS BACKPACK??? He’s not much on thermoses though he does love soup so I might try to find a good one and see if that works.

Then I have to think of something substantial that a) will keep unrefrigerated, and b) doesn’t need reheating (he has no access to a kitchen and is on the road all day). These are often dinner leftovers. But sometimes it’s a second sandwich of meat and cheese or even a roasted eggplant, bell pepper, onion mixture with olive oil-vinegar dressing; I pack some good, dense, crusty bread separately and he can either make a sandwich or just eat the veggies, dipping the bread in. I use braunschweiger (meat-liver paste) for a treat (it’s fatty but he works very hard physically).

Spaghetti, roasted, broiled meats, chicken in gravy with rice, kalua pig with poi, stew all work well and he likes them. (I’ve been on a luau leaf quick lately, but he doesn’t seem too interested. I can put a freezer pack in his lunch but it’s rarely necessary. He’s eaten half of the food by 11 and the other half by 3. I don’t send fish unless it’s canned tuna or smoked salmon. He also likes hard-boiled eggs. 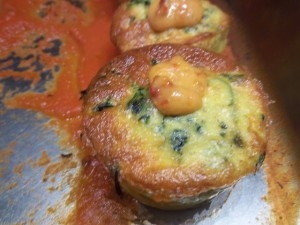 However, I did go with some friends who are retired military to Hale Koa for brunch. Quite a spread. All you could want, including hot stations and desserts. It’s more like lunch than brunch but they do pancakes, omelettes, benedicts and such. And the desserts: mac nut cream pie, a triple-chocolate mousse cake, lemon cakes, I can’t remember what all! And they actually taste as good as they look, which is rare in brunch pastry displays these days.

I was interested in something I hadn’t seen: crustless mini-quiches baked in cupcake tins (probably in silicone ones). Beautiful little things although I didn’t think much of the quiche itself; it was bubbly inside, meaning the eggs had overcooked. A quiche should be moist and tender. And they served them in a tomato-based sauce that made no sense to me. Still, the idea is charming and I think I’ll experiment with a good quiche recipe and try it at my next brunch. Eating them also made me realize how much of my enjoyment of those Nancy’s brand mini-quiches (in the frozen food section at Safeway, Costco) is the pastry! (Fat and flour, what’s not to like.)

Tonight (deep breath) I again attempted a lemon meringue pie, straight from my Joy of Cooking. It’s beautiful, as was one I tried several weeks ago. That one involved 8 eggs and a cornstarch slurry in the meringue and it was a disaster of mammoth proportions. Tasted like nothing but cornstarch because the filling never did thicken and I put more in when I shouldn’t have.

This time, I followed the recipe exactly: cornstarch-sugar-milk on top of double boiler, cooked over boiling water for 10 minutes; 3 egg yolks, tempered with a little of the hot cornstarch mixture, then stirred in and cooked another 5-10 minutes, lemon juice, lemon rind and butter to finish. It didn’t thicken. Ever. But it’s in the fridge with a lovely straightforward meringue (3 eggs whites, 1/8 teaspooon cream of tartar, 4 tablespoons sugar, 1 teaspoon vanilla). It bakes for 10-15 minutes in an already baked pie shell to brown and set the meringue. But as I pulled it out, the filling was still sloshing. If it doesn’t stiffen in refrigeration, I’ll try it with 6 tablespoons cornstarch (Joy of Cooking suggests 5-6 and I went with 5). If this doesn’t work, I’m turning I’m putting my apron over my head and sitting sheva. If it does, you’ll get pictures and a recipe and me, full of myself.

Why couldn’t Husband crave something I CAN make. Killer pineapple upside down cake (or multi-fruit upside down cake), or the delightful almond tart I learned in Italy, or even just plain old apple pie?. (One reason for the latter is that there’s no point to making one when you can get a truck-wheel sized and excellent apple pie at Costco.)

Tonight I tried something new: Parmesan Tilapia, sold frozen, in pre-fried cutlets, in big bags at Sam’s Club. Baked at 375 degrees, they emerge crunchy but with the fish still moist. Calorie count isn’t bad, either. Husband liked them; I’m making a sandwich with one fillet for his lunch tomorrow.

As Philippians 1:3 says, “I thank my God for every remembrance of you,” dear readers.