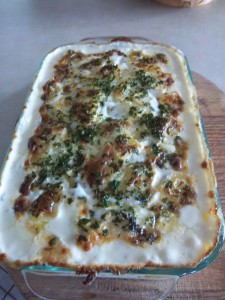 Our holiday was modest this year, but there are some culinary memories that will stick (probably because, as I write this, I am fasting in anticipation of a some medical tests):

An avocado pie (check Star-Advertiser Web site) made with Grandpa’s avocado (now grafted on my brother’s property), which is particularly thick-fleshed and butter. To be honest, you couldn’t taste the avocado at all, but anything that combines cream cheese and sour cream in a graham cracker pie crust has my vote.

My pumpkin spice chocolate chip bread. I was tempted to make another batch with leftover pumpkin but it’s time to stop with the sweets.

A charming mini-panettone given me by a girlfriend; I hardly got a bite but it was like being beamed back to Italy.

Speaking of which, I made an immense batch of Venetian saor (meaning, not, as I thought, sour but Venetian dialect for “flavor”). Saor is made by sweating onions in olive oil, frying fresh sardines until crisp, tossing the whole with golden raisins and pine nuts and splashing it liberally with vinegar. It’s meant to be made one or two days ahead; and there’s so much acid it’s often left at room temperature. I opted for the refrigerator and, due to the lack of sardines here, used shrimp. To my dismay, I arrived at a girlfriend’s party to find she’d made the same dish (like coming across someone wearing the same dress). A side-by-side tasting determined that her shrimp were best (lightly battered and deep-fried) and the sharp-sweet flavor of my version was best though the steamed shrimp didn’t shine. So we threw them all in together. Saor is standard fare in  cicchetti bars (the Venetian version of a tapas bar, with small plates). Mounded on good, crusty bread I can eat it for days. This was one thing in the fridge that DIDN’T get thrown out.

Some magnificent golden puff pastry purses stuffed with shellfish — lobster and shrimp. As delicious as they were beautiful.

As the opposite end of the spectrum: leftover chicken sandwiches with cranberry sauce.

A seven-bone roast in a mustard-shoyu marinade, cooked medium-to-rare on the grill, served with grilled asparagus and Harriet’s Potatoes. Harriet’s Potatoes are a fixture in my friendship group. They’re named for an elder friend of ours but they really came from Bon Appetit magazine. But back when Harriet was still exercising her magical culinary skills (she’s in her 90s now and cooks less often), this was her go-to company dish. I’ve never been able to make it as well as she did — until this year. It still wasn’t as pretty but the flavor and texture were right.

This is an extremely indulgent dish involving cheese and cream. Though you can pare some fat by using alternatives, you can’t go totally without cream or  it won’t thicken properly. I had trouble finding the garlic Boursin cheese called for this year so I used Alouette herb and garlic. Boursin garlic is much better. Boursin pepper flavor is nasty. Boursin has the texture of whipped cream cheese, but very slightly grainy like goat cheese.

P.S. I suppose someone with more skill than I might be able to figure an alternative to whipping cream that will thicken without going rock hard and not taste like soybeans or something…if anyone does invent a lighter version successfully, I’d love to see it.) 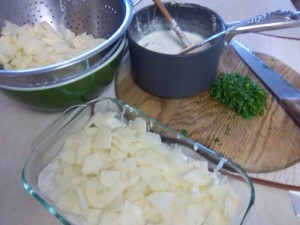 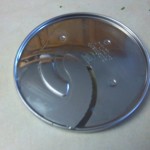 Slice the potatoes paper thin using a mandoline (for whole slices, which can be attractively arranged) or food processor (in which case you have to quarter the potatoes to fit down the feed tube and you get chips); no matter, thinness is vital and it’s delicious whatever the shape.

In a saucepan, melt together whipping cream and boursin over medium-low heat (an immersion blender is nice for getting a smooth product quickly).

Taste this “sauce” and season with salt and pepper as desired.

In a 7-by-11-inch baking dish, or an 8-by-10-inch dish, arrange a shallow layer of potatoes. Drizzle with cheese and cream mixture. Repeat twice. Top with finely minced parsley. It’s important that there be liquid coating all the potatoes; not drowning but coated.

Bake at 400 degrees for one hour. Test the potatoes; if they resist a skewer but the top is browned, top with foil and continue cooking until potatoes are soft. The liquid should be largely absorbed but, like scalloped potatoes, these don’t slice neatly.

Harriet used to vary the size of the recipe depending on the gathering. In general, she said, count 1 largish new potato per person. For two pans, use 4 cups whipping cream and 2-3 packages boursin.