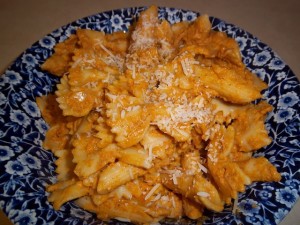 Pumpkin pasta: It's not ravioli with sage browned butter...but it'll do to use up pumpkin puree.

My project Monday, besides a fabulous nap, was peering into the depths of the refrigerator and identifying my targets, like cleaning a closet or storeroom. Categories: 1. No use, getting sad — throw away. 2. Still good, needs a transformation. 3. Useful for later, into the freezer. 4. Lunch for Husband Wednesday.

Listen carefully, because I’m going to ask your advice in the end.

Among the ingredients in the “still good” category was a plastic container packed with half a 28-ounce can of pumpkin puree, leftover from spiced pumpkin breads I gave as Christmas presents. I thought of an Italian favorite: pumpkin-stuffed ravioli in sage browned butter.(Sergio at Cafe Sistina used to make it so well but it’s rarely on the menu.) Thought about rolling pasta. Thought again. (DOES ANYONE IN HONOLULU sell fresh pasta sheets, rolled and chilled?)

Plan B: a simpler pumpkin pasta. Found several online and chose the easiest, one for which I had all the ingredients. The comments on rachaelraymag.com included one from a reader who said her kids like it, think of it as a form of mac and cheese. That didn’t sound too exciting to me, so I figured I’d pump up some of the flavoring ingredients to give it a sharper edge. Husband liked it well enough, though it didn’t get the all-important Husband Noise, the grunt of appreciation. It also made way more than 2 people need; the idea was NOT to create more leftovers.

8 ounces penne (I had not quite enough penne; used some bowties to make it up); whole wheat or gluten-free pasta is fine*

1/3 onion, minced (or 3 shallots, which would be better but I didn’t have them)

1/2 large can pumpkin puree, unspiced, about 12-14 ounces (a whole small can is 15 ounces and that wouldn’t be bad, just thickens the sauce)

1/4 cup heavy cream, nonfat cream or Greek yogurt (I didn’t use Greek yogurt but intend to try it; the acidity should add another layer of flavor)

1 cup chicken broth (mine was made from the bones of the chicken I roasted for Christmas, made with half a Meyer lemon, bay leaf, a half-bunch of chopped parsley, a carrot and an onion; the rest of the broth went for jook, of course)

Salt and pepper to taste; it’ll need it

Bring a very large pot of water to a boil and cook pasta.

Meanwhile heat olive oil in deep-sided skillet and sweat onion and garlic (limp, not browned). Add pumpkin and cream or yogurt, stir well (or use a whisk or immersion blender). Add spices and simmer gently for 10 minutes. Taste. Add salt and pepper or other spices accordingly.

* The new Safeway on Beretania now carries my favorite brand of gluten-free pasta; the stuff in the turquoise box. One thing to know: This pasta is great fresh from the pot, but it doesn’t hold well. Also, it doesn’t take as long to cook as wheat pasta.

Penne pumpkin proved to be a filling and comforting dish but I still think it needs a bit more spice or acidic tang. I’m thinking sour cream whirled in at the end, Greek yogurt (as I said), maybe a few drops of  fresh lemon juice? But would that make it curdle?

WOULD LOVE TO HEAR your thoughts.