A different kind of sustenance: story 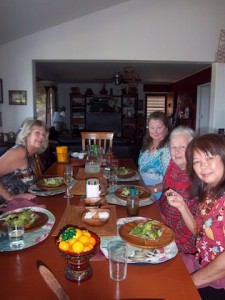 Friends and kupuna join over food and talk.

Yesterday featured an event I’d been looking forward to — an annual girls luncheon with my three best friends on Oahu, and with one of their mothers, who turned 82. We started at 11:30 a.m. and I got home at 5. Had to miss a second party because I was too tired! And now the fridge is full of stuff: ‘take plates’ from the luncheon, leftovers from Christmas and the dish I planned to take to the second party. I won’t have to cook until Wednesday, I think.

We didn’t just gossip or catch up, we played a few verbal games, one of which was to recall past birthdays and past Christmases. Our elder told of the only birthday cake her mother ever made her, laboring to produce a delectable orange cake with orange frosting. She’s never forgotten it, melting in her mouth with love (although her non-cooking mother swore never to do another, and she didn’t).

I recalled the time my parents promised Santa was coming; they’d called him at the North Pole and he promised to make an early, early visit to our home on Main Street in Wailuku so I could see him. I was a spinning top all evening. Finally, we heard bells jingly, heavy footsteps coming down Grandmas long front porch, “Ho, ho, ho!” A shadow on the screen door. A tall man in red felt and white fur with a bearrd and twinkling eyes walked in, a bag over his shoulder. And I (already an observant little journalist), said, “Eh, Cousin Harold, how come you wearing Santa’s suit?” He’d come barefoot, no black boots, and I recognized his long, knobby surfers feet.

We had a fun time recalling the now-laughable rules our mothers laid down because certain behaviors simply weren’t “proper.” 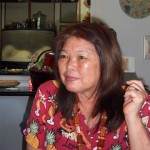 My beautiful friend, Jan: Still graceful and proper, but a great cook and giver of lively parties.

Kupuna said she was not allowed to eat the skins of potatoes, particularly in a restaurant (she still loves potato skins). I was told only prostitutes pierced their ears or wore anklets (I have both). One had to dress up for travel, no matter how uncomfortable. Always gloves and high heels and hose and makeup whenever you left the house. Another girlfriend got barked at at the airport when she came home from college wearing jeans.

“Oh, everything,” the quietest but most graceful of us said. “My mother was Japanese. You had to be proper in EVERYTHING.” We laughed and laughed.

Food flowed. We had two versions of Venetian-style shrimp saor (I made one, my girlfriend another and we tasted side by side. Her shrimp, lightly fried, was best and my sauce — olive oil sweated onions, vinegar, golden raisins, pine nuts) was best.) So we just dumped them in altogether. Salmon, salami, cheeses. Steak, cheesed vegetables, gorgeous puff pastry purses of crab and shrimp. A cake, a pie.

I like something on my steak on the rare occasions when I eat it; the girlfriend who was hosting brought out green papaya chutney that was exceptional, mellow and not too highly spiced (I tend to go crazy with the spices so my chutneys have an edge). She told a funny story: When they had their driveway repaved and some other work done, they invited the Samoan crew to enjoy the ripe papayas from their one tree. The Samoans, who ate the papaya like apples, big bites, skin, seeds and all, spit the seeds all along the perimeter of the wall they were building. Now the house is surrounded by papaya trees! 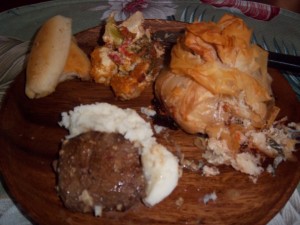 They were overwhelmed with green papaya, so she and her husband chutneyed it. I’m going to get the recipe and will share it.

My girlfriend is growing saffron in pots! “She’s going to be rich!,” Auntie said.

Cake, for our elder who loves peanut M&Ms, was a chocolate-peanut M&M bundt. (We all chorused the “bundt” scene from “My Big Fat Greek Wedding.”) And there was an avocado pie made with avocado from my brother’s tree, the child of my grandfather’s tree, the fruit of which is smooth as melting butter. If you hadn’t known the main ingredient was avocado, you’d have wracked your brain. It was one of those cream cheese-sour cream refrigerator pies with graham cracker crust. MUCH too easy to eat. See www.star-advertiser.com for the recipe; you have to pay and go back in the files, I’m afraid.

Best, though, was the talk, which, to me, is a form of food — food to give and food to take in. If you guard your tongue, the words you do utter will be sustenance to others. They were yesterday. 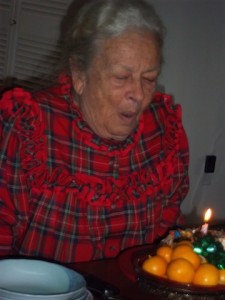 You're never too old to blow out the candles — or tell a good story.