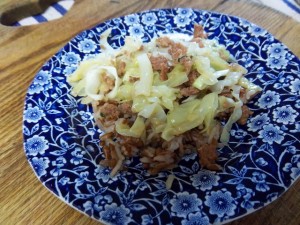 My starving college student specialty: stir-fried corned beef and cabbage. In my co-ed days, less than $1.50 would get you all you needed to make a bountiful wokfull.

I spent some time with my 16-year-old grandniece recently and marveled at how much she knew that I didn’t. She talked of books, TV shows, movies, actors, technology, apps, even developments in journalism since I left the stone age of print reporting two years ago, none of which I recognized. She hopes to be a journalist, by which she means what I would call a documentarian or a paid blogger.

But I also noted what I knew much that she didn’t, some of which I hope to teach her. (I’ve actually developed the curriculum for a College-Bound Cooking course, just haven’t gotten around to talking my friends at KCC into letting me teach it.)

One thing I know is how to keep a house and cook. (Need to reconnect with how to iron a man’s shirt? How to darn a sock or fix an unraveling sweater? I’m your gal.)

I believe, as my grandmother did, that a neat house is the base of a productive day just as a good breakfast is the base of a healthful diet. She taught me to make my bed every morning, even if no one would see it. She believed that a clean and neat environment led to a more organized mind and better work. She believed that caring for your things (from clothes to furniture) gave them a longer life. (This was, of course, before everything was made of cheap plastic, electronic devices were considered old at toddler age and people stopped fixing things and started buying new ones at every opportunity.)

My mother further taught me that one good quality thing, well cared for, was better than three cheaply made things. (That’s definitely my philosophy on kitchen tools; give me one good, sharp knife that fits my hand over any dozen paid-programming knife sets.)

As for me, I believe that everyone ought to be taught basic cooking skills in school. And everyone should store a handful of easy, healthful day-to-day dishes and one or two “company” dishes in their databank.

When I was in college in Seattle, living in tiny apartments and seeing perhaps $200 a month pass through my hands from my dad’s V.A. pension and a part-time job (I had grants for tuition), I entertained a lot. None of us could afford to eat out; there weren’t so many fast food places in the early ’70s. None of us had cars. But we all wanted to eat and missed our family’s cooking. It was the dawning of foodie-ism, a word that had not yet been invented.

We’d write home for recipes. We’d take the bus to the Pike Place Market and wander the farmer’s stands. If you went late in the day, there would always be someone trying to get rid of some bruised tomatoes, or some herbs that were looking sad. You could buy cheese ends in a big bag. They GAVE soup bones away.

For a time, a group of us used to meet for group cooking fests every Sunday. A friend worked nights at the premier men’s club in Seattle and he had access to the kitchen and was allowed to make meals for himself. He’d come to brunch right from work and we never knew what he’d “score,” anything from shrimp to some cheese the name of which we couldn’t pronounce. (Okay, yes, he was stealing.). I’d go to the market each Saturday and buy fresh eggs and braunshweiger or bologna ends. If anyone went home, they’d raid their Mom’s larder and bring back sometimes bizarre things — that’s where I learned to eat canned smoked oysters. (Haven’t had one of those in YEARS.)

We had great fun learning to make a proper omelette; we’d fill them with whatever we could scrounge. Julia Child ruled!

My repertoire included stir-fried corned beef and cabbage (cabbage was about 4 cents a pound; corned beef could be streeeeetched into a stew, or made into cakes or patties), anything in cream sauce, including kama’aina curry and, of course, chicken hekka (bone-in, skin-on thighs were pennies a pound). I did a lot with chicken livers because you could get a tub for 50 cents. I’d serve my suitors a dessert of berries fresh from the market drizzled with sweetened condensed milk. I baked bread. I did things with cream cheese that make me feel overfull to this day.

We had a lot of fun, learned some kitchen skills, told stories, build friendships, some of which last to this da, and there was some great drama of the sort that you never forget (although the details may be fuzzy). All I have to say to my college friend Cindy is, “Remember the time we . . . ” and as soon as I reach a noun or a verb, she’s right with me and we laugh.

I want my grandniece to make these kinds of solid friendships. I want her to be both independent and dependent, both carefully thoughtful and curiously open. I want her to know the joy of making a welcoming home for herself and others and the camraderie (and good health) that can grow from the kitchen.

Maybe all this seems like nostalgia run rampant. But I don’t think taking care of yourself, your home and your friends ever gets out of date.