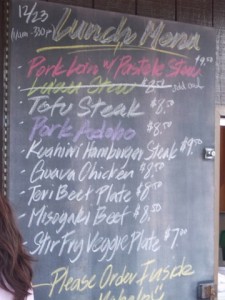 So my girlfriend Susan and I plan a pleasant girls’ Christmas lunch and it turns into . . . a pa’ina (feast).

I’m working on a story about eating local but more healthfully and my editor suggested I call chef Mark Noguchi, co-owner of He’eia Kea Pier General Store & Deli north of Kane’ohe. The name was familiar but I couldn’t capture a memory until I got him on the phone and he said, “Wanda! You remember me?” I fumbled around desperately searching my disintegrating memory bank. “Hek-ka,” he said. 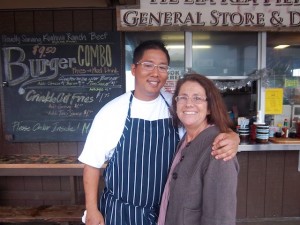 Chef Mark Noguchi and me. We meet in person at last after e-mails and a couple of near misses.

He was the guy who years ago at The Advertiser of sainted memory, e-mailed me out of the blue when I wondered in print about the origins of this dish, a one-pot sukiyaki, rarely seen now but very common in my childhood. He had a clue here, a clue there, we worked together and he finally found someone at the Japanese Cultural Center to nail it. Hek-ka (it’s pronounced that way) is an Okinawan term; it refers to a hoe blade, on which farmers would fry meat when they were out in the fields. (They did this because eating meat was prohibited at that time, so they had to be discreet.) We had been in the same room a couple of times but never actually met in person.

Noguchi, 36, grew up in Manoa but lived for years in Hilo, and later Kona, on the Big Island. After stints at Chef Mavro and town, he and some partners acquired the lease for He’eia Pier when the previous lessees retired. I missed all this because it was back in April, when I was ill. 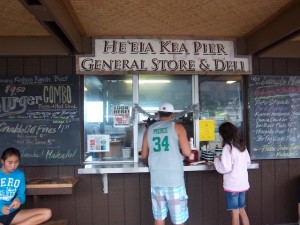 Check the chalkboard, order inside, pick up at the window. Grind!

The “restaurant” is just a trio of picnic tables in front of the takeout window next to the small store. But culinarily speaking, it’s the Alan Wong’s/Chef Mavro/Roy’s/Sam Choy’s/town of local-style takeout. A camera crew from TV’s “Chef Stars” was there filming so we got to cockroach the special menu he made for them. We also watched the dishes that came out around us: the day’s three or four specials plus the guava chicken, teri beef, stir-fried veggies and burgers that are always available.

Chef Mark, who danced for Halau O Kekuhi when he lived in Hilo, came out, honi-honi, then went back to the kitchen where he worked like a blur, expediting for his team. (Expediting means putting in the orders, receiving the orders, adding any finishing touches and sending the plate out.) He left us with his friend and publicist Amanda Corby, who told about Mark’s philosophy: only fresh, local vegetables and fresh, local (caught or aquacultured) fish and meat, purchased as close to He’eia as humanly possible. He strives to work with small, family-owned operations employing sustainable practices. And sometimes an auntie shows up at the door with a bucketful of starfruit (he made a starfruit salad served under Samoan crab cakes, wow; but is scratching his head about what else to do.) 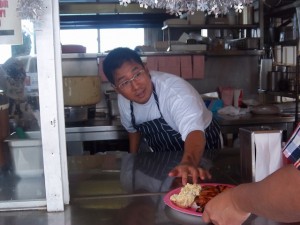 “Simple is better,” said Amanda, quoting Chef. “You should be able to taste all the ingredients in your food. Usually, he tries to keep it to five ingredients. If you use more than five, he wants to know why.”

At that moment, the order-taker sprinted out to the chalkboard menu to “86” the lu’au leaf, drawing a line through it. The waiting customers cried out in unison, as if they’d been practicing, “Aaaaaaaaaawwwwwww.”

On a good day, you will taste things here you won’t find at most, maybe any, plate lunch place: We had a salad of ho’i’o (fern shoots, from the Big Island) with WOW farms yellow tomatoes. We had lu’au stew (stewed taro leaves); I ate two servings and I don’t eat two servings of anything! We had fried papio (young ulua; cravalle, jack or pampano fish) with pickled ogo (from Paepae o He’eia) and akulikuli leaf (also from Paepae).

You thought akulikuli was just a gorgeous magenta flower, didn’t you?  You know you’re special when you get an akulikuli lei, yeah? The word is general in Hawaiian for succulents and so includes this tidal vegetable now being raised in the nearby fishpond. The pointed green leaves are edible and deliciously so: crisp, spurting slightly sweet, slightly salty  juices onto your palate. 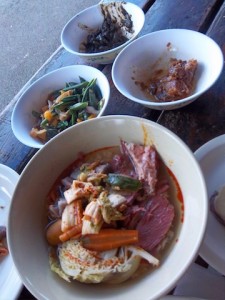 The corned beef "Thing" with ho'i'o salad at left and adobo at right and luau leaf barely visible up top.

But the dish that made me go, “Huh???” and then “Yah!!!!” was a combination neither my friend nor I could have imagined. Okay, stay with me, now: Saimin bowl of rice, topped with lengths of melting housemade corned beef brisket (Kuahiwi Ranch, Big Island), chunks of taro grown in Kahalu’u, organic carrots from MA’O Farm in Wai’anae and . … wait for it… . kim chee. We didn’t even get to the rice until we’d explored this strange melange thoroughly. “It’s a collision that works,” I thought. “This guy’s got chops if he can pull this off.”

While we were there, Hi’ilei Kawelo, executive director of Paepae o He’eia, which is attempting to revitalized He’eia fishponds, dropped by for some pa’iai (the stiff, packed form of poi). Pai’ai is the first stage after pounding the steamed corm; Hawaiians stored their poi that way and carried it when they traveled. It is distinctly different from the thin, somewhat sour poi you normally encounter — light-colored with a texture just a bit stiffer than cream cheese and mild, sweet flavor. If I hadn’t been full by then, I’d have grabbed the bowl of luau leaf stew, helped myself to more of Hi’ilei’s pa’i’ai and gone to Hawaiian heaven. (Hi’ilei told us about a new farmers’ market in Kane’ohe; see item at right.)

Earlier, Chef Mark told me that he approaches cooking in the of  hula: Just as he was taught to respect the forest when they gathered vegetation for adornments, he treats his ingredients with respect.

He also told me that the restaurant took a little guff at first because the servings aren’t huge. But he believes strongly in right-sizing for all the right reasons: health, appreciating your food and its producers, generally feeling better, not overstuffed.  (And I might add that buying local while paying farmers and fishermen and other food producers what they’re worth is not cheap).

When his staff was bummed out by those who grumbled, he counseled them to see this as an opportunity to talk about the food: where it comes from, who raised it, what’s different about it than what you would get at Two Pound Plate Lunch. Amanda said the local fishermen and other regulars have come around because where else are they going to look at the chalkboard and find these kinds of dishes? Plus, said Chef Mark, out in the country, if you saw the kalo (taro) came from so-and-so’s farm, the guy probably knows the farmer.

I left thinking, “This is not just a restaurant. It’s an educational institution. But unlike school, you always want to go.” 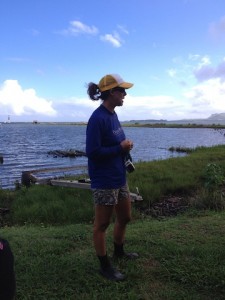