With apologies to Foodland, but “Food, Family & Friends”

I’m trying to think of something new to say about how cool it is to be around food and cooks, around elders and storytellers. That’s been my life for the past few days. I’ve spent a lot of time with family and food always flows into the conversation somewhere. (Or into our mouths while we talk).

I thought about starting this blog, “So three Portuguese women get into a car…” because one mega-cool thing that happened when I visited Maui yesterday was that Mom and I met up with a “girlfriend” of hers (they’re 84), a woman I’ve heard about for years but never met. (Long story.) Neither of them drive much now so the distance between Makawao and Wailuku is bridged by hour-long phone calls. We met her at the Veteran’s Cemetary in Makawao where my father and step-father are both buried. (Sounds odd but Hawaii people are very comfortable around graveyards, it seems to me. I love to go up there and sit by Daddy’s white marble headstone and look down the hill — he’s got a million-dollar view — and just sort of feel his mana.) Anyway, the skies opened so we all got into Mommy’s friend’s car and started to wala’o and you’d think there were 15 people in there. Hands flying, conversations overlapping, stories flowing. We sat for half an hour like that.

I wouldn’t trade that for anything.

Then, I’m working on a story for The Honolulu Weekly to run AFTER this coming week of excess when we all go on diets. I talked to a bunch of chefs on the phone or via e-mail and got uku-many ideas for how to slim down a local-style diet. Warm feelings came from talking to smart, caring, skilled people I’ve known, for the most part, for a long time. And I got to talk to Frank DeLima who is hilarious even when isn’t working from a script! My favorite thing: When he tells you about an ingredient, he tells you where to get it (“in the big bag, in Costco”) and where it’s less expensive (“it’s on sale now at Longs”). So local, I bus’ laugh. 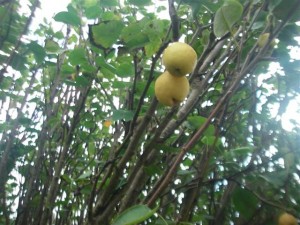 My horticulturalist friend Heidi Bornhorst (who gave me the Maui rose above) says the so-called Christmas pear, a variety of Asian pear, is going off, just as Meyer lemons are doing right now. She e-mailed to ask what to do with them. Well, you can do anything you’d do with a more conventional Western pear but remembering the following: They are more watery. They are more crisp. They are more delicately flavored. Slice them thin, saute them in a syrup and lay them beautifully out on top of a cheesecake (can be storebought), letting the syrup drizzle down the sides. You can make a crisp or cobbler or pie, but use some thickening agent (cornstarch, tapioca, flour or oat flour). In the new “Sweet Dash of Aloha” cookbook I edited, chef Sharon Kobayashi does a fruit summer roll filled with tropical fruit and Asian pear is one of them (it’s in stores now and we have signings in January).

So friends, I’m too tired to cook or come up with a recipe but I’m going to make that Meyer lemon pie in the next day or two and I’ll let you know how it comes out!