Clip this: A guide for your food-loving out-of-town guests

The highest accolade one food writer can offer another is “I wish I had written that.”

So it was that Wednesday, sitting over my butter- and cream cheese-slathered bialy at This is It Deli on Cooke Street, I began mumbling curses when I saw in the Star-Advertiser Nadine Kam’s list of places to send guests when visiting O’ahu.  (The very interesting other half of the piece was on her favorite New York spots but it was the O’ahu spots I wanted to weigh in on.)

Food writers invariably get two questions: What’s your favorite restaurant? And where should I eat? I always want to answer the first by saying, “I don’t know, let me think. And while I’m thinking, which one is your favorite kid?” But the proper answer to the question is: What does “good” mean to you? Atmosphere? Price? Type of food? Volume of food? How serious are you about food? Is service important? Do you have time? Do you have money? Do you have kids who know how to behave in a restaurant? Do you have access to a car? What meal are we talking about?

For example, we love to travel with our brother and sister-in-law but they don’t care about food one little bit; Cheesecake Factory in Waikiki would be a great choice for us when we’re together, a place I’d not set foot in on my own but I know we’d all enjoy together. If I had friends with a sense of humor in town, I’d make sure we went to La Mariana Sailing Club, where the food is just passable but the tiki chochkes have to be seen to be believed and the sing-a-longs are a scream.

But for me? The choosing of a restaurant is a serious business . When I’m traveling, I refuse to “waste” a single meal and canvas my carefully crafted “try this” list as though it were a battle plan, plotting my day around meal stops. This strikes non-foodies as pretentious, or at least nuts. Fine, let them eat McDonald’s in Venice. (And I won’t even comment on people whose idea of traveling is going from one clothing shop or knitting shop or scrapbooking store or antique alley to another — that’s their choice and it’s neither pretentious nor nuts, it’s just what they like.)

Baked goods: In Haleiwa, stop at Waialua Bakery (which is actually in Haleiwa town) for the extraordinary cinnamon buns. I am going to get that recipe if it’s the last thing I do. I DREAM about these things. They are rather plain — just a hamburger bun-size mounded round, golden brown, moist and dense in texture with a very slight glaze. These buns have absolutely the perfect balance of butter to sugar to cinnamon to salt — rich but not sickeningly so, sweet but not overly so with just enough spice and salt to cut the richness. Their sandwiches are amazing, too. Other: Russian Tea Biscuits (raspberry-filled biscuit batter squares) at Agnes’ Portuguese Bakery. Champion Malassadas for light, Macau-style treats.

Lunchwagons: Sean Priester’s Soul Patrol (check the Web site for weekday lunch locations, http://pacificsoulhawaii.com/soul-patrol/) — okay, it’s not local-style plate lunch but its soul-satisfying, finger-lickin’ and cheap. If you really want to see what Island-style lunchwagons are about, go to Eat the Street, a monthly food truck rally sponsored by StreetGrindz the last Friday evening of every month in a Kakaako location (check www.streetgrindz.com to register for updates). Or just drive around downtown weekdays about 11:30.

Plate lunch and okazu-ya: Kahai Street Kitchen (Kalihi industrial district) and Dean’s Drive-Inn (Kane’ohe) are chef-run operations that offer something a bit more special than average but within the same price and composition (rice, salad, entree) framework. Also very good: Sugoi just off Dillingham near Waiakamilo and Koi on Dillingham. Oh, and I gotta have my garlic chicken at Mitsu-Ken on School Street, one of the few places where I’m willing to wait in line for carry-out.

Hawaiian Food: This isn’t going to make me popular but, in my observation, they’re all about the same, really. One may have heftier laulau, one more smoky kalua, one more choices, another specialties such as dried aku. But I haven’t seen much difference between Ono’s, Haili’s, People’s, etc. etc. The exception is Helena’s on South Street in Kalihi, where everything is just a bit quirky and perhaps more Chinese or more “Chock” than Hawaiian; the food inspired by the late Helen Chock is just plain Grandma-good, especially the non-traditional pipikaula smoked in house. A James Beard regional treasure winner.

Poke: When there’s a place with a name like Poke Stop (Waipahu and Mililani), how can you even consider anyplace else? The difference is freshness and chef Elmer Guzman at the helm, devising some creative takes on the usual chopped ‘ahi.

Noodles: I’m not much of a big-bowl-of-noodles eater — can’t do justice to the volume. But I appreciate fresh noodles and housemade broth. Many of the best spots are Japan-based chains or operated by Japanese nationals (check out regional styles of udon at Shirokiya food floor; or Menchanko Tei or Marukame Udon in Waikiki). Local saimin/ramen/noodle shops get my votes, too, including Shige’s, Palace or Nakai.

Shave Ice: No need to drive all the way to Haleiwa or try to remember where Waiola moved to. You just need a great, big blessing from the god of parking (whose name, I’ve been informed, is Ralph), in order to pull up to Shimazu Shave Ice on South Street in Liliha. Always a line. Always. Lotsa cool flavors. Made to order. Bowling ball-size servings. (And if you’re on Maui, the best all-time, finest shave ice you’ll ever encounter, Tom’s Mini Mart in Waiehu, not far from Wailuku. Thanks, Bonnie Friedman of Tour da Maui for turning me on to Tom’s.)

Shrimp: I fell out of love with the whole shrimp truck thing a long, long time ago when I realized that most of the shrimp isn’t grown locally and, with your eyes closed, you can’t tell one over-cooked garlic butter shrimp from another. I used to favor Romy’s because they had fresh, live shrimp for sale, but now that honor belongs to Fumi’s, near the antique store in Kahuku right on the shrimp ponds. I’ve been watching them since they opened and they just get better.

Family/casual restaurants: Worth every minute of drive-time on H-1 is kid-friendly Hapa Grill in Kapolei where the traditional plate lunch of the elder generation (the BEST teri beef ever, anywhere, hands down) is blended gracefully with the more elegant ideas of the younger generation (chicken and basil pasta, fresh fish with garlic-parsley sauce) of the Tangonan family. Kenny’s Restaurant at Kamehameha Shopping Center is among the few old-style diner holdouts with Columbia Inn and Flamingo gone — the kind of place where the waitresses have worked since your Grandma was dating, there meals come in sets with things like Jell-O and fruit cocktail and they serve excellent fresh, local reef fish plates. And don’t forget Wailana Coffee House (salad bar, 24 hours) and Like Like Drive-Inn (neither on Like Like nor a drive-inn, more Japanese-oriented). Zippy’s? Always there when you get a chili-rice craving or need a Dream Cake but never my first choice.

Contemporary. I’d have to go with Nadine’s choice of town but, you’ll also find similar interesting, hip food, noise and blase service at Kevin Haney’s new SALT Kitchen & Tasting (a very urban, narrow, stacked bar with restaurant upstairs). And I really like Goran Streng’s bright, clean Finnish-Swedish-themed Tango with its house-cured salmon and Swedish sausage hash (Swedish food was mentioned in several trend-setting lists for 2012, Goran — how about pumping up that side of the menu?).

Izakaya (Japenese pub): Hmm, used to be Nonbei, followed closely by Tokkuri Tei and Mr. Oji-San. Still like all of them but there may be new entrants out there I haven’t encountered yet. 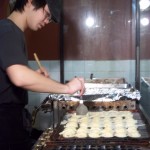 Japanese octopus pops (takoyaki) are made hot and fresh at Shirokiya.

Try the takoyaki (“octopus pops”) at Shirokiya for a new (to us) Japanese snack.

Cupcakes: There are so many options that my only question is, who will survive? I hope it’s Let Them Eat Cupcakes, Hokulani and, for a full-service cake bakery, Cakeworks. The food trend folks are already saying cupcakes are over, over over and we’re moving to pies, crisps, cobblers and the like. In that category, check yourself into Castle Hospital and wait for the day when the berry cobbler is on the menu. Order two. They ignored my plea for a recipe. I hold a resentment about that but I’m working on it in therapy. 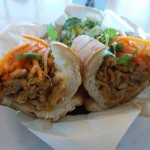 Hawaii Regional Cuisine/Fine Dining: Let’s say you want an extraordinary experience, don’t care about the check, like well-chosen wines, enjoy dressing up and aren’t taking the children. (Please do NOT take the children, in case I’m there that night.) We all know Alan Wong’s Restaurant, Chef Mavro and Roy’s. Take it as read: If you’re a serious foodie, you should experience all three, very different, very fine. But here are some alternatives you might not have considered. Among the most appreciated by their many repeat customers but off the radar of others: Orchids at Halekulani (ocean views and extraordinary food, especially seafood, everything of the finest), Le Bistro in Niu Valley (classic and contemporary French in a comfortable, busy but not crowded room, excellent service), Hiroshi’s Eurasion Cuisine (Japan-inspired exquisite small and large plates, enophile-pleasing wine selection) and the two most serene, formal and lovely rooms in Honolulu La Mer at Halekulani (multiple award winner, Mediterranean French, Diamond Head views) and Michel’s at the Colony Surf (vintage classic French menu and the waves wash right up to the open, sliding windows).

And there’ll be someplace new opening today that I haven’t tried yet. Ain’t life grand?