Had lunch Friday with Dan Nakasone, a marketing expert who helps farmers and food producers find buyers for their products and who serves as Alan Wong’s “sourcing” expert, 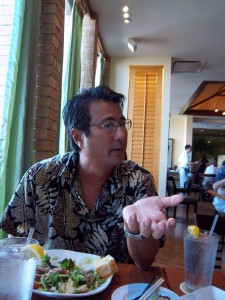 linking him with new producers. Dan’s always full of story ideas and juicy insider tidbits and he and I share a concern for the future of agriculture in the Islands.

Our lunch was partly to catch up, partly to introduce him to a woman I met recently (Brenen Guyol) who’d like to do the kind of work he does and partly to see what was new on the menu at The Pineapple Room. I ordered the the garlic chicken “McSandwich” with furikake mac salad and it was a thing of beauty — strips of garlic chicken karaage on a sort of hot dog bun on steroids with (inspired idea!) the mac salad right in the sandwich.

To be honest, I wouldn’t have ordered if if I’d realized how rich it was. I was only able to manage a few, crispy, crunchy, garlickey bites. Thank goodness I ordered a green salad on the side and not fries. But it made Husband happy

The Pineapple Room's garlic chicken sandwich — sin on a bun.

for a leftover lunch. Better for me was the bruschetta plate with small but exquisite servings of goat cheese, tomato jam, olive tapenade and a garlicky, rough-textured basil pesto with a small tower of toasts. That would have been more than enough for a lunch for me. And the yuzu soda was really refreshing.

Dan told me he’s working with a group to present a forum, “Facing Future,” April 15 at Leeward Community College, for chefs, farmer and members of the general public to discuss the current state of the food movement. In part, it celebrates 20 years of Hawai’i Regional Cuisine but he hopes it will give rise to a more inclusive and broader directed chefs/farmers/producers/stakeholders group. The goal: Reaching “critical mass” in local production, the critical mass that allows farmers to make a living, buyers to receive adequate supply and end users to gain access to fresh, local, affordable food. I’m going to be one of the panel facilitators so I’ll keep you posted on further plans.

Conversation ranged from efforts to pump up hydroponic farming of tilapia, support the reintrodution of a local chicken growing operation, Zipppy’s commitment to buying local beef, the many challenges farmers and restaurateurs face, and who the new farmers are and how they’re finding a market (Laotians and other Southeast Asians who see directly to Chinatown vendors).

In a foodie aside, Brenen told me about socca, chickpea crepe from the south of France and we hopped online on her smart phone to see a picture of this street food popular in Lyon. I’m eager to get into baked goods that make use of garbanzo flour because it’s so high in protein and healthful. I’ll be trying to make socca soon.

Dan recommended we check out the Farms of the Future 5-part series on You Tube, which he said was both encouraging and scary at the same time.

I love foodie time and don’t get as much of it as I did whe I worked full-time as a food editor. A great afternoon!

Tomorrow I’ll tell you about the new coobkooks I’ve been mining for ideas.